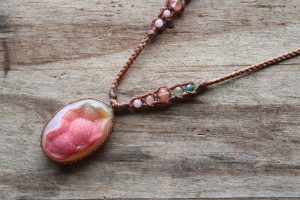 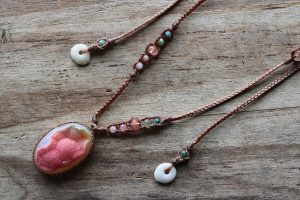 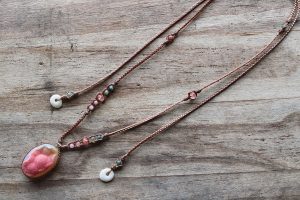 Watermelon Druzy Agate Asymmetrical Necklace. Stunning Watermelon Druzy Agate cabochon with varying size Pink Opal, Ocean Jasper, and Cherry Quartz beads on an adjustable microweave woven/braided necklace with Kauai Puka Shell adjuster clasps. This necklace pairs well with our Pink Opal Gemstone Microweave Bracelet and Pink Opal Gemstone Anklet or pair it with a Hawaiian Puka Shell Bracelet or Kauai Puka Shell Anklet. Our Pink Opal Woven Circle Earrings also match perfectly. All shells are found on Kauai, Hawaii. They are all hand-picked and have been carefully chosen to create beautiful and unique jewelry that can be worn as a forever piece. Each piece of our jewelry is a work of art that is unique to Kauai Hawaii.

PHOTOS ARE OF THE EXACT NECKLACE THAT YOU WILL RECEIVE.

In geology, druse refers to a coating of fine crystals on a rock fracture surface or vein or within a vug or geode. Druse occurs worldwide; the most common is perhaps quartz druse within voids in chert or agates. Garnet, calcite, dolomitic, and a variety of minerals may occur as druse coatings. Generally, it is possible to find drusy natural gemstones in any location in which there is a place for water to collect and evaporate on rock. It most often appears along river beds and shorelines. It, therefore, is helpful for collectors, whether commercial or otherwise, to be aware of the minerals common to an area when they look for a particular type of druse.

Because of its sparkling appearance, druse is sometimes used in jewelry making. Both the glittering effect of the tiny crystals and the color of the base mineral are factors when selecting druse for this purpose. Druse is used with a variety of natural gemstones including agate, crystalline quartz, and many more. Druse can be colored by electroplating, a process similar to rhodium application, giving the stone a fancy look, and a brighter appearance than is natural.

The Pink Opal is found only in the Andes. It was already considered by the Incas as a sacred stone, which saw in them an eye of the gods left by them on the earth to remind people to live in harmony with each other.

Read more about Pink Opal (opens in a new window)

Jasper, an aggregate of microgranular quartz and/or chalcedony and other mineral phases, is an opaque, impure variety of silica, usually red, yellow, brown or green in color; and rarely blue. The common red color is due to iron inclusions. The mineral aggregate breaks with a smooth surface and is used for ornamentation or as a gemstone. It can be highly polished and is used for items such as vases, seals, and snuff boxes. The specific gravity of jasper is typically 2.5 to 2.9. A green variety with red spots, known as heliotrope (bloodstone), is one of the traditional birthstones for March. Jaspilite is a banded iron formation rock that often has distinctive bands of jasper.

The Healing Energies, Metaphysical Properties, Legendary Uses and Meaning of Jasper (opens in a new window)

Quartz is a hard, crystalline mineral composed of silicon and oxygen atoms. The atoms are linked in a continuous framework of SiO4 silicon-oxygen tetrahedra, with each oxygen being shared between two tetrahedra, giving an overall chemical formula of SiO2. Quartz is the second most abundant mineral in Earth’s continental crust, behind feldspar.

Quartz exists in two forms, the normal α-quartz, and the high-temperature β-quartz, both of which are chiral. The transformation from α-quartz to β-quartz takes place abruptly at 573 °C (846 K; 1,063 °F). Since the transformation is accompanied by a significant change in volume, it can easily induce fracturing of ceramics or rocks passing through this temperature threshold.

There are many different varieties of quartz, several of which are semi-precious gemstones. Since antiquity, varieties of quartz have been the most commonly used minerals in the making of jewelry and hardstone carvings, especially in Eurasia.

The Healing Energies, Metaphysical Properties, Legendary Uses and Meaning of Quartz (opens in a new window) 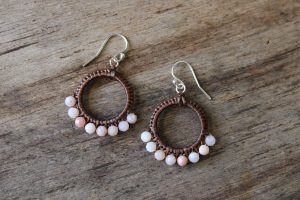 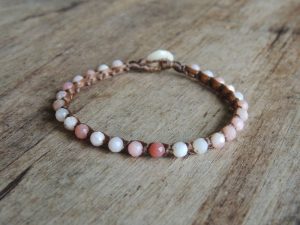 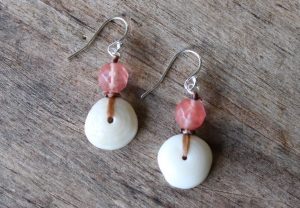