Save 20% off your entire order! Enter code FF2020 on the checkout page. Aloha! Dismiss

All shells are found on Kauai, Hawaii. They are all hand-picked and have been carefully chosen to create beautiful and unique jewelry that can be worn as a forever piece.

PHOTO IS THE EXACT BRACELET/SHELL THAT YOU WILL RECEIVE.

Hawaiian Sunrise Shells are a beautiful sight to behold. Each one has unique splashes of pink, red, orange, yellow and purple shades, akin to what you would see during an actual Hawaiian sunrise. In fact, it is speculated that their common name may have arisen because of this asset or perhaps because they were once abundantly found on the shorelines in locations like Ke‘e Beach on Kauai at sunrise. Because of their increased consumer demand, however, now they are typically found only at depths from around 10 to 30 feet where collectors must dive for them.

What makes these beauties even more unique is that they are endemic to Hawai‘i and only found in waters surrounding the islands. Legends surrounding these shells claim that, in the past, they were only worn by ali‘i (Hawaiian royalty), though there has been no actual evidence proving this.

Rose quartz is a type of quartz that exhibits a pale pink to rose red hue. The color is usually considered due to trace amounts of titanium, iron, or manganese, in the material. Some rose quartz contains microscopic rutile needles that produce an asterism in transmitted light. Recent X-ray diffraction studies suggest that the color is due to thin microscopic fibers of possible dumortierite within the quartz.

Additionally, there is a rare type of pink quartz (also frequently called crystalline rose quartz) with color that is thought to be caused by trace amounts of phosphate or aluminum. The color in crystals is apparently photosensitive and subject to fading. The first crystals were found in a pegmatite found near Rumford, Maine, USA and in Minas Gerais, Brazil.

Jade is featured prominently in East Asian, South Asian, and Southeast Asian art, but also has an important place in many other cultures. 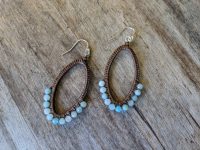