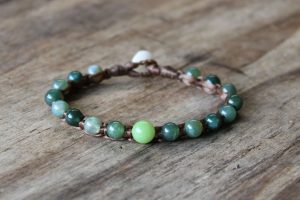 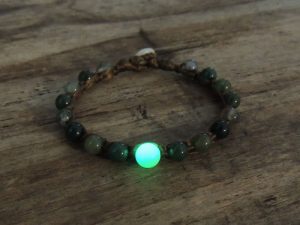 Modern Ye Ming Zhu beads glow in the dark! Charge them up under the sun or other bright light. Color/glow is Light Green  (see photos).

To ensure a proper fit, we strongly recommend measuring your actual wrist and ordering a size that will fit as snug as possible, as some stretching/settling (up to 1/4″) will occur.

Ancient and Modern Ye Ming Zhu or otherwise spelled Yeh Ming Jhu is the legendary glowing stone. They were the emperor’s most prized possession for hundreds of years. If you go to China they are depicted everywhere as the dragon’s pearl and known by almost everyone. Aside from occasionally seeing it on TV or finding counterfeits in the market the Ye Ming Zhu experience, even in china stops there. There has only been one book written about it, in Chinese, out of print, and only talks about the science of the structure (take note a new book is in the final stages of completion). However, in Chinese lore, the tales are abundant and passed down throughout many generations.

So what is this elusive glowing stone? How have I not heard of it before?

The Ye Ming Zhu which the emperors possessed is known as Ancient Ye Ming Zhu signifying it being found in the ground. It is found primarily in china, which is extremely rare and even more expensive. With the record holder weighing in at 6.1 tons and valued at 3.1 billion dollars it’s no wonder why we have yet to see these. It is most common to find Ancient Ye Ming Zhu with fluorite however on occasion it can be found with a few dozen other minerals including jade, meteor, fossil, and diamond. Regardless of the mineral, it’s found with, in order for it to be considered Ancient Ye Ming Zhu it must contain a combination of rare earth elements allowing it to send and receive light and Qi (energy).

Chances are very few of us will ever be able to see, touch, or own a high-quality piece of Ancient Ye Ming Zhu in our lives. They are just that rare. In 1966 during the cultural revolution, a few dozen that were owned by the royal families disappeared from China and cannot be found to this day.

After years of trying, about ten years ago a team of brilliant scientists in an extremely high tech lab discovered how to alchemize the rare earth elements found in Ancient Ye Ming Zhu into a crystal structure derived from the diamond. Diamond Ye Ming Zhu contains a tetrahedron crystalline structure and is one of the strongest and brightest forms ever found. So naturally when they discovered the alchemical formula to create Modern Ye Ming Zhu that is what it was modeled it after. Modern Ye Ming Zhu is non-toxic and has the same energetic properties as Ancient Yeh Ming Zhu since they contain the same active elements in the same crystalline structure. Rare earth elements are used for their energetic properties and are found in most of today’s highest-tech devices. It is not a coincidence that China supplies ninety-seven percent of the rare earth elements and that most of the Ancient Ye Ming Zhu found have been in China.

Moss agate is a semi-precious gemstone formed from silicon dioxide. It is a form of chalcedony which includes minerals of a green color embedded in the stone, forming filaments and other patterns suggestive of moss. The field is a clear or milky-white quartz, and the included minerals are mainly oxides of manganese or iron. It is not a true form of agate, as it lacks agate’s defining feature of concentric banding. Moss agate is of the white variety with green inclusions that resemble moss. It occurs in many locations. The colors are formed due to trace amounts of metal present as an impurity, such as chrome or iron. The metals can make different colors depending on their valence (oxidation state).

Despite its name, moss agate does not contain organic matter and is usually formed from weathered volcanic rocks.

The Healing Energies, Metaphysical Properties, Legendary Uses and Meaning of Agate (opens in a new window) 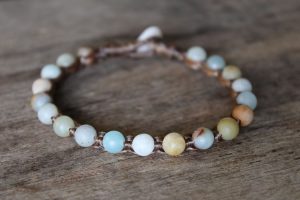