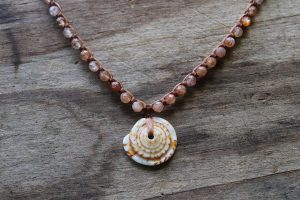 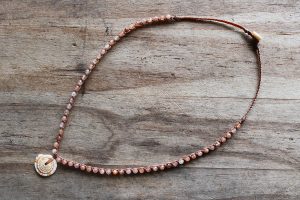 Faceted Sunstone with Kauai Puka Shell Pendant Necklace. Faceted Sunstone gemstones (4mm) on a microweave woven necklace with a spectacular Kauai Puka Shell pendant and an authentic Hawaiian Puka Shell clasp. This necklace goes great with our Sunstone Gemstone Bracelet and our Sunstone & Puka Shell Earrings.  All shells are found on Kauai, Hawaii. They are all hand-picked and have been carefully chosen to create beautiful and unique jewelry that can be worn as a forever piece. Each piece of our jewelry is a work of art that is unique to Kauai Hawaii.

PHOTOS ARE OF THE EXACT NECKLACE THAT YOU WILL RECEIVE.

Sunstone is a plagioclase feldspar, which when viewed from certain directions exhibits a spangled appearance. It has been found in Southern Norway, Sweden, various United States localities, and on some beaches along the midcoast of South Australia.

The optical effect appears to be due to reflections from inclusions of red copper, in the form of minute scales, which are hexagonal, rhombic, or irregular in shape, and are disposed of parallel to the principal cleavage-plane. These inclusions give the stone an appearance something like that of aventurine, hence sunstone is known also as “aventurine-feldspar”. The optical effect called schiller and the color in Oregon Sunstone is due to copper. The middle part of this crystal sparkles, and usually the color is darkest in the middle and becomes lighter toward the outer edges.

The feldspar which usually displays the aventurine appearance is oligoclase, though the effect is sometimes seen in orthoclase: hence two kinds of sunstone are distinguished as “oligoclase sunstone” and “orthoclase sunstone”.

The Healing Energies, Metaphysical Properties, Legendary Uses and Meaning of Sunstone (opens in a new window) 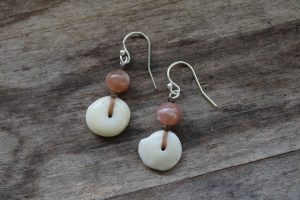 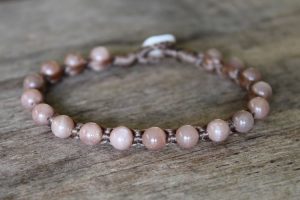